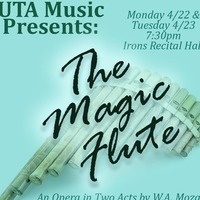 Join us for our Opera Workshop production of The Magic Flute, music by W. A. Mozart.

A short summary of the opera, from mozart.com:

Pamina, the daughter of the Queen of the Night, is abducted by Sarastro, who is charged with taking care of the legacy of the Sun King. The beautiful prince Tamino is sent to free her. This is not an easy task. A giant serpent chases him and he swoons. When he regains consciousness, the monster is dead and the bird-catcher Papageno makes an appearance. Tamino is convinced that Papageno, who does not contradict him, killed the snake. Three ladies give Tamino a portrait of Pamina. He immediately falls in love and promises the Queen of the Night to free her from Sarastro’s clutches. Papageno is to come with him. They receive a magic flute, the magic of which tames wild animals, and magic bells to protect them on their journey to Sarastro’s palace.

Sarastro declares that he only abducted Pamina to protect her from the – in his eyes – evil Queen of the Night. Tamino and Pamina are destined for one another. He wants to ordain Tamino to be a priest at the temple of wisdom, but he needs to prove his worth by first passing various tests. Finally Tamino and Pamina pass through the “gate of terror”, overcome fire and water and are accepted into the ranks of the enlightened.

Papageno also experiences the bliss of love. He encounters Papagena and the two fall in love. And the Queen of the Night? She is obliterated trying to destroy Sarastro’s temple. “The rays of sun chase night away…”

The performances will be held in Irons Recital Hall, FA105, located in the South Section of the Fine Arts Building.

Doors will open at approximately 7:00pm, tickets are available for purchase in advance through UTAtickets.com or at the door. $9 Adults, $6 Students/Seniors.