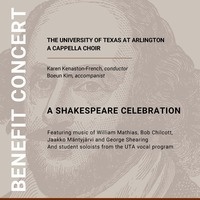 Join us at First Presbyterian Church in Arlington for a preview concert of the the UTA A Cappella Choir performance for the National Collegiate Choral Organization's National Conference in College Park, Maryland on November 8th!

Free Admission
Donations encouraged to support the choir’s travel to perform at NCCO in Maryland!

About the UTA A Cappella Choir

The 50-voice A Cappella Choir is the premiere choral ensemble of the university, comprised primarily of undergraduate and graduate vocal music majors. The choir performed at the 2019 and 2014 conventions of the Texas Music Educators Association, the American Choral Directors Association national convention in 2015, and the 2016 ACDA Southwestern Division Conference. They have appeared with the Dallas Symphony Orchestra, the Fort Worth Symphony Orchestra, the Fort Worth Chorale, the Texas Ballet Theatre, and with the Rolling Stones in concert. Their album, The Road Home, was named a finalist in the 2014 American Prize for Choral Performance.