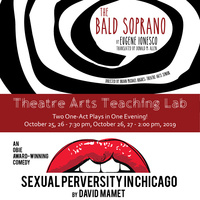 An Absurdist Satire!
In 1950, The Bald Soprano inspired a revolution in dramatic techniques and helped inaugurate the Theatre of the Absurd. It is a hilarious, unique satire on the ordinary English middle class, in which “Mr. and Mrs. Smith” talk to each other at cross purposes, while their guests, “Mr. and Mrs. Martin” fail to understand, and the Maid and a Fire Chief enter the absurd fray, getting nowhere at all.

-And in the Same Evening-

An Award-Winning Comedy!
In this Obie Award-winning play, two male office workers, Danny and Bernie, are on the make in the swinging singles scene of the early 1970s. Danny meets Deborah in a library, and soon they are lovers as well as roommates. The other couple, Bernie and Joan, seem to have the politics of sex down pat, but are as confused as their more naïve counterparts. After much comic drama, the two men end as they started, talking a good game in the local bar.