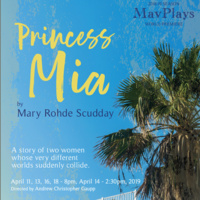 The story of two women whose very different worlds collide. An older half-sister is suddenly faced with the guardianship for her intellectually disabled sibling…a half-sister she never even knew existed until the sudden death of their father.

A World Premiere production written by the Rockefeller Playwriting Fellowship-winner Mary Rohde Scudday of San Antonio, her play LADY BUG, LADY BUG FLY AWAY HOME was also the Kennedy Center nominee as one of the best ten plays produced outside of New York.