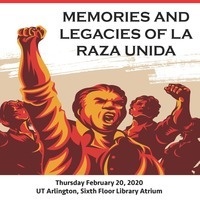 The founding of La Raza Unida Party in Texas in 1970 was a seminal moment in the history of the Chicano Civil Rights movement. To mark the fiftieth anniversary of the party’s founding, UT Arlington is bringing together RUP activists and organizers on Thursday February 20, 2020 to reflect on the party’s political campaigns and actions.