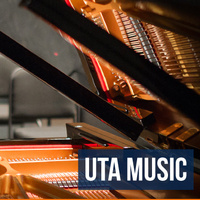 Join us for an evening of music with Gustavo Romero, Professor of Piano at the Univeristy of North Texas.

A native of San Diego with heritage in Guadalajara, Mexico, Mr. Romero discovered his love and gift for the piano at the age of five and gave his first public performances at the age of 10, when he also won his first piano competition. At 13, he performed with the New York Philharmonic under Zubin Mehta. Rudolf Serkin recognized his exceptional talent, and at the age of 14 he attended the Juilliard School.