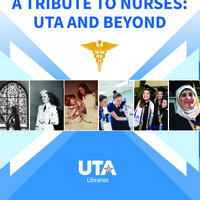 A Tribute to Nurses: UTA and Beyond

A Tribute to Nurses: UTA and Beyond is an exhibit in the UTA Libraries Special Collections. It is open to the public Tuesdays through Saturdays, from 9 am to 5 pm, until September 15.

The College of Nursing and Health Innovation at UTA traces its roots back to the John Sealy Hospital Training School for Nurses in Galveston. It was established in 1890 and later became the University of Texas System School of Nursing. In 1972, a previously existing nursing program in Fort Worth became affiliated with the UT System, which ultimately moved to UTA in 1977 to become what is now CONHI.

Through more than 130 years of education and 50 years at UTA, this nursing program has strengthened its community through the development of its nurse professionals.

This exhibit focuses on major themes such as developments in the nursing profession; the training of nurses; public service during wartime; and rites of passage such as graduation, capping, and pinning ceremonies.